The ambulance ride for Justin Schroer lasted only a few minutes. Still, by the time medics pulled into the ambulance bay at University of New Mexico Hospital, an emergency room physician and trauma surgeon, nurses, radiologist, respiratory specialists and other critical care team members had assembled in the Level 1 trauma center, the only one of its kind in the state.

Doctors quickly assessed their patient. His vital signs were good, and he was conscious and alert. They took Schroer across the hall for a CT scan before rushing him to an operating room, where they would learn more about the damage the bullet had caused as it ripped through Schroer’s abdomen.

His wife, Jen, had accompanied Justin in the ambulance, and she stood in the hospital hallway as the medical staff pushed him past her. Their eyes met, but neither spoke. Once Schroer reached the operating room, he reached for his left hand.

“I remember taking off my wedding ring and giving it to the doctor,” Justin, 34, said during a recent interview. “I told him, ‘Make sure my wife gets this.’ That was probably the hardest part.”

Sitting across from her husband in the couple’s living room, Jen nodded and wiped away tears.  “(A nurse) dropped it in my hand, and I remember thinking, ‘This is so heavy.’”

The last memory Justin Schroer has of that fateful spring morning was the anesthesia mask descending toward his face (“just like in the movies”)  just before he went under the knife.

UNM Hospital treated some 2,200 critically ill and injured trauma patients last year – victims of horrific accidents, violent crimes and other unexpected tragedies. More than 300 of those patients were stabbing or gunshot victims. We see some of those stories on the evening news every night.

What we don’t see, however, are the long and grueling recoveries trauma patients and their families endure – the physical and emotional pain that accompanies the kind of frightening, sometimes unthinkable circumstances that require advanced trauma care.

A TV news reporter covering Justin’s shooting told viewers that the victim was “going to be OK,” which was certainly true. But it didn’t begin to describe the long and difficult personal journey Justin, his wife and family have faced since the shooting. Nor does it provide insight into role that faith, a strong marriage and a team of caring medical experts played in Justin’s survival and recovery.

Justin and Jen first sat down with me for an interview in their university-area home last summer, just a few months after the shooting. Justin had not yet returned to his job as development director at the UNM Cancer Center. He was still receiving home nurse care in addition to regularly visiting his UNM doctors at the hospital.

The Schroers married in 2011 at a picturesque ski resort in California’s Sierra Nevada, high above a glistening Huntington Lake. In their living room hangs a photograph from that sunny autumn day, the happy couple beaming after exchanging their vows. Justin, an Albuquerque native, moved to California shortly after graduating from the University of New Mexico to take a job at California State University, Fresno. He first met Jen at a football game there, and then, coincidentally, reconnected with her professionally.

“Coffee led to dinner, which led to dating,” Justin said.

The dates eventually led to that mountaintop wedding. A couple of years later, a job offer at the UNM Cancer Center gave Justin and Jen the opportunity to head back to Justin’s home town. They rented an attractive bungalow style home on a quiet, tree-lined street, just a few blocks from UNM’s North Campus.

“We loved the area, a safe area,” Justin said. “It was all a great new opportunity.” On Friday, May 17, the couple had been in their new home, and Justin in his new job, for just six weeks. He woke at 5:45 a.m. and prepared for an early morning run. He kissed Jen and told her he’d be back in a little while, and then he walked out the door.

He was working his music player’s earbuds into his ears when he noticed a white 1990s-era Chevrolet pickup truck driving towards him, slowing as it got closer. Justin suspected nothing out of the ordinary, thinking the truck might be turning into a driveway. Suddenly, out of the corner of his eye, he saw a gun coming out of an open window, just a few feet away.

“I saw the fire come out of it, and at that moment I sprinted, took off running,” he recalled.

Four more shots followed as he ran down the street. The truck drove off in the opposite direction. At first, he didn’t realize he’d been hit, but then found the wound with his hand, which was covered in blood.

Chris Plaman was still sleeping when gunshots rang out just down the street from his girlfriend’s house, where he had spent the night.

“We thought we heard someone yell, ‘Oh my God,” Plaman said during a recent interview. Plaman, his girlfriend and her roommate are third-year students at the UNM School of Medicine, located just blocks away from the spot where Justin was shot. 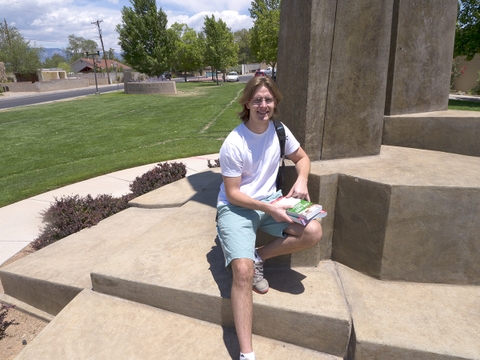 Schroer credits three UNM medical students, including Chris Plaman (above), for helping to save his life.

Plaman found Justin still on his feet, another neighbor next to him and on the phone with a police dispatcher. The bystanders pled with Justin to sit down.

“I was able to immediately tell he needed help,” Plaman recalled. “I saw him holding his side, and it clicked. He had been shot. I saw bleeding in two spots.”

Plaman called for towels and he and his fellow medical students began assessing Justin’s vital signs and looking for other possible bullet wounds. They focused on keeping him alert and awake, while applying first aid. A neighbor called Justin’s wife, who arrived at the scene just as an ambulance pulled up.

“I didn’t think twice,” said Plaman about putting his medical training to use in a real- world emergency. And while Plaman downplays his role, Justin credits him and the other med students for helping to save his life.

“I remember they were asking me a lot of questions, trying to keep me alert and alive,“ Justin said. “I think they played a huge part in saving my life.”

‘Our job is to save your life’

After the CT scan and exploratory surgery, trauma doctors concluded that a large-caliber bullet had entered the side of Justin’s abdomen and exited out his back. It tore through his large intestine but narrowly missed his kidneys and other vital organs. Had the bullet been on a slightly different trajectory, Justin’s injuries could have been far more serious, perhaps fatal. 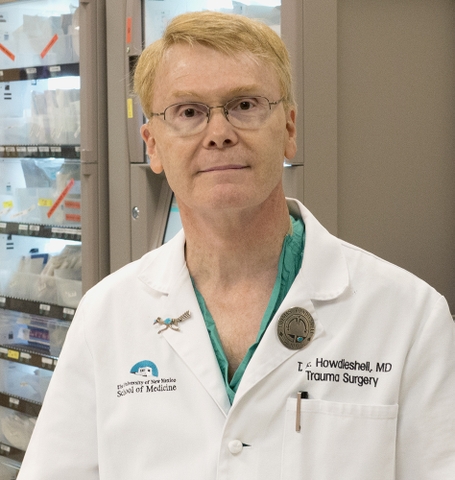 Dr. Thomas Howdieshell, a trauma surgeon at UNM Hospital, is in his 26th year of practice.

“It missed his spleen by less than a centimeter,” said UNM trauma surgeon Dr. Thomas Howdieshell, one of the physicians who has been treating Justin since he arrived at the hospital in May. “I don’t know how it missed it. It was so very close.”

The day after Justin’s exploratory surgery, Dr. Howdieshell performed a colostomy, removing about 20 percent of Justin’s damaged large intestine, which lowers the risk of intraabdominal and wound infection.  Next month, Howdieshell will reverse the operation, re-connecting Justin’s large intestine. He expects a full recovery, and credits Justin’s physical and emotional strength for it.

“He’s a young, fit guy with good reserves,” Howdieshell said. “And he has a wonderful wife and a very supportive family.”

Howdieshell, who trained at UNM as a trauma surgery fellow and returned in 2002 to join the faculty, is in his 26th year of practice. He was attracted to his specialty because it offered the opportunity to “do something different every day.” And he has spent his entire career at academic health centers, where he loves to teach young resident physicians and conduct the kind of biomedical research that helps him be a better physician.

“You really have to be creative, because the injuries aren’t created by a scalpel, but by a bullet, or a car part or some other trauma,” he said. “Our job is to save your life.“

The Schroers are grateful for Howdieshell and his fellow physicians, the “phenomenal nurses” at UNM Hospital, and the EMTs and UNM medical students who helped Justin before he arrived there. Justin says he has new respect for academic health centers and a better understanding of the role they play in healthcare – not just treating patients, but training new clinicians and conducting research that improves the care they provide.

“Going through this process has given me a ton of insight and perspective,” he said.

Today, Justin is back at work full time, and though he will need to take a few weeks off following his surgery next month, he hopes to be back to full strength early next year.  As for his case, no arrests have been made and Justin isn’t aware of any leads. The identity and motive of his attacker remains a mystery, and even after Justin’s wounds heal, emotional pain from such a random, senseless event will linger. But Justin and Jen both say it won’t consume them.

“In any life there are hurdles,” Jen said. “It’s how you react to those hurdles that is the question of your life. I don’t want someone else’s poor decision to have a dark shadow over us for the rest of our lives. I’m not going to let this define us.”

“It’s absurd,” Justin said of the shooting. “But so much has happened since then. We’re huge believers in our faith and God, and I’m healing, thanks to that and to great doctors, nurses, friends, family and my wife.”

Getting some exercise and limiting stress can keep you healthy