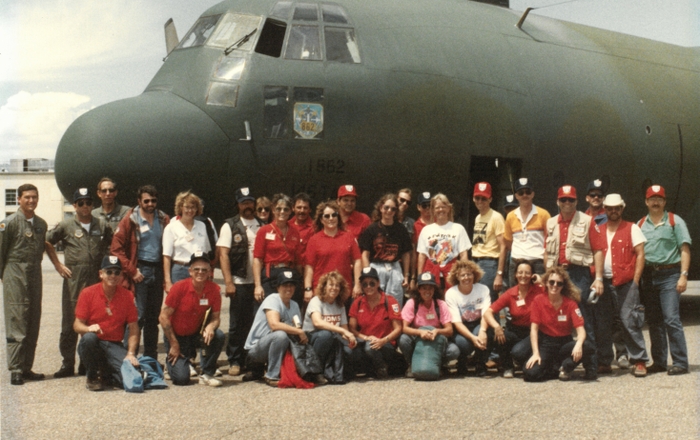 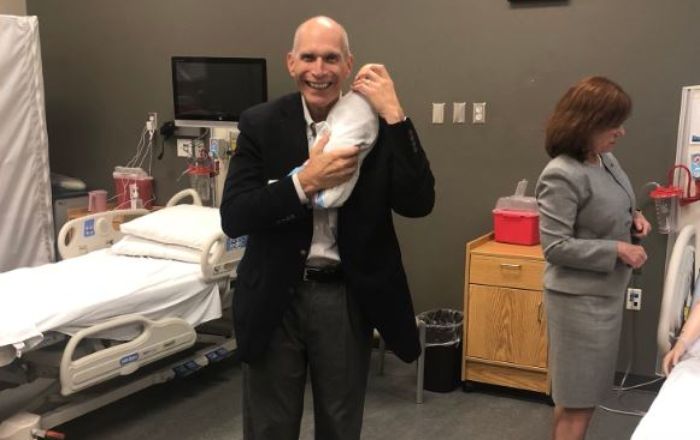 Dr. Roth comforts a simulation baby while President Garnett Stokes gets a tour of the state-of-the-art HSC Simulation Lab 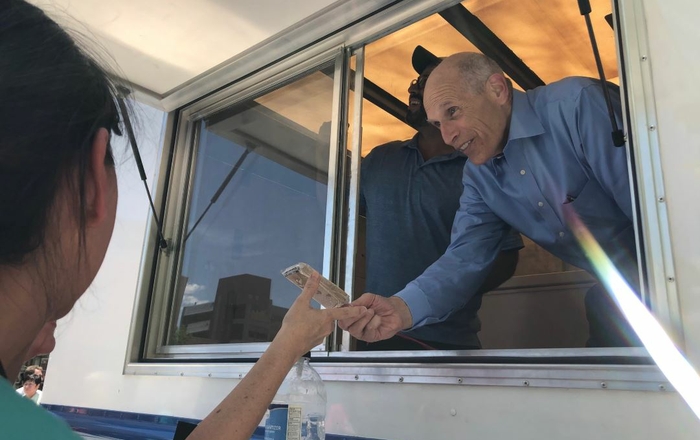 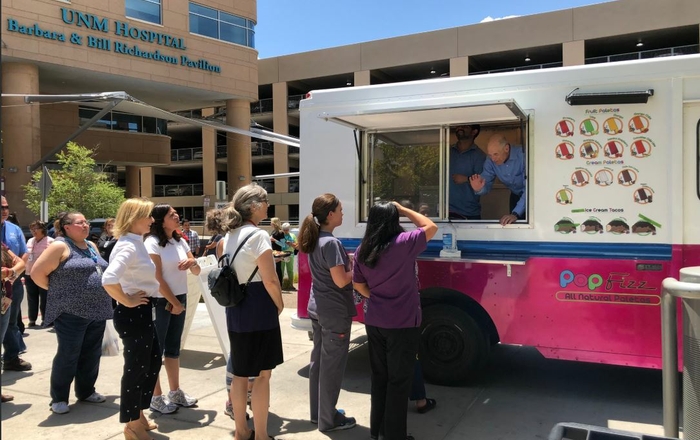 Dr. Roth hands out ice cream for a staff and provider appreciation event 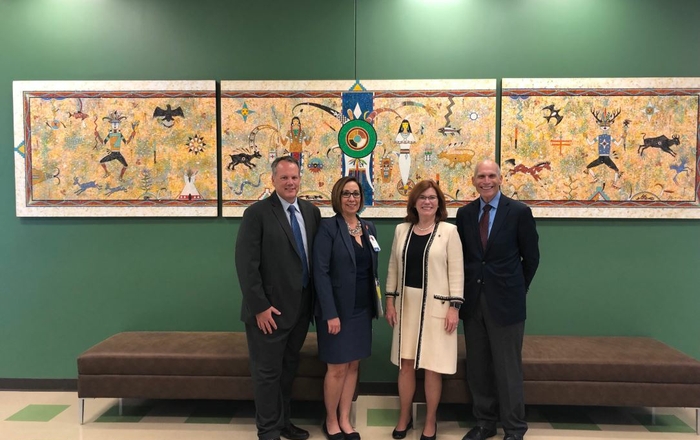 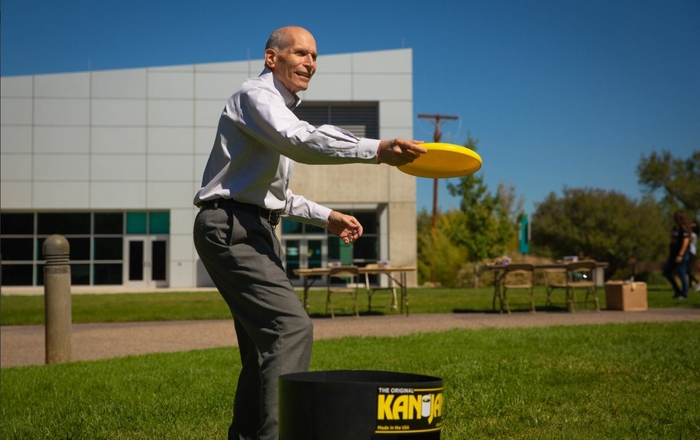 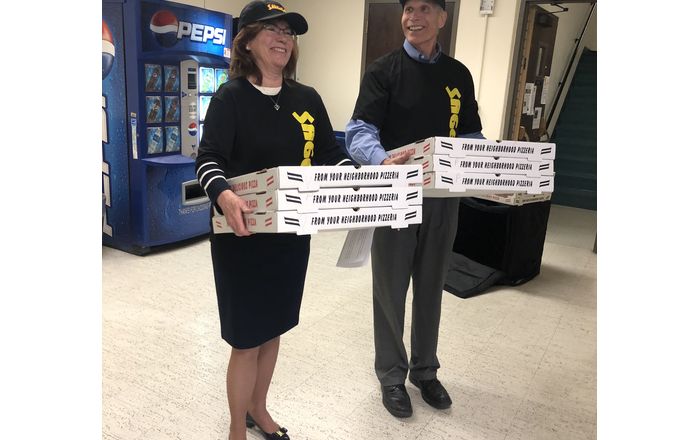 Pizza Giveaway as Thanks for UNM Gives Fundraising

University of New Mexico President Garnett S. Stokes, left, and UNM Health Sciences Chancellor Paul B. Roth, right, deliver Saggios pizzas to the Department of Pediatrics as a thank you gift for raising $29,474 for the UNM Gives Campaign. 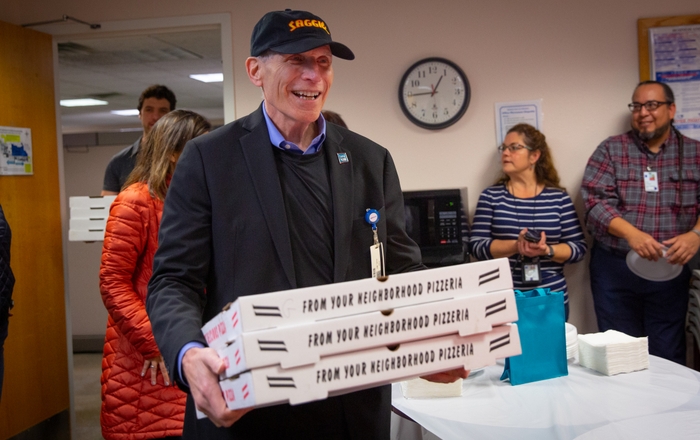 The University of New Mexico Health Sciences Center Chancellor Paul B. Roth delivers pizza to the staff and faculty of the UNM Hospital's Department of Pediatrics as a way of thanking them for rasing $29,474 for the UNM Gives campaign. 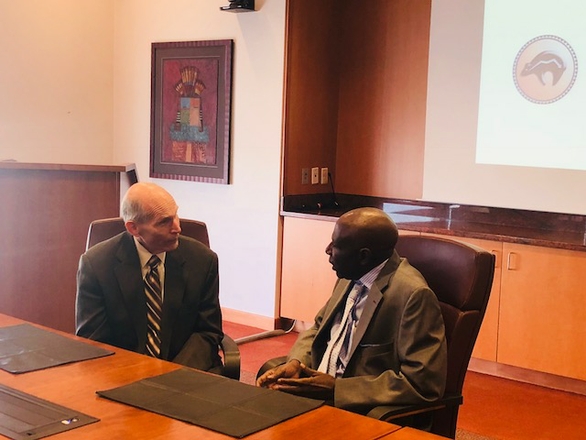 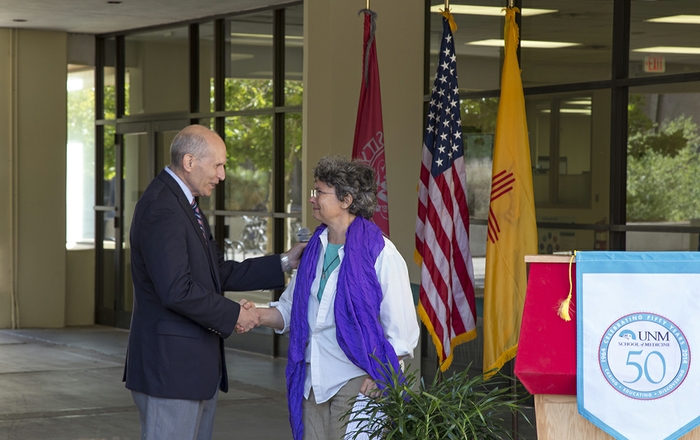 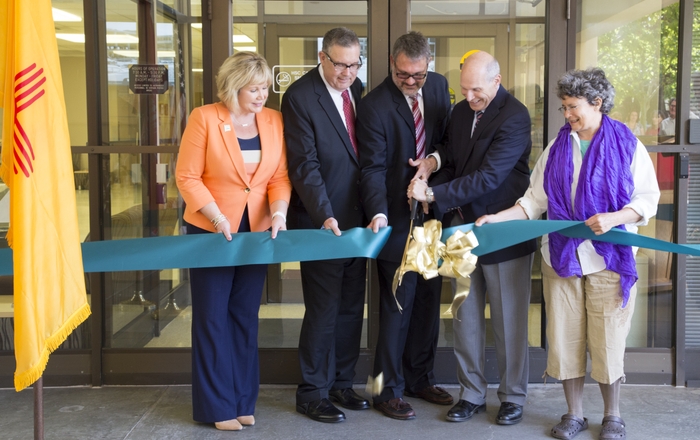 From left to right, Suzanne Quillen, member of the UNM Board of Regents and chair of the Health Sciences Center Board of Directors; Dr. Ralph Fitz; Dr. Grahame Fitz; UNM Health Sciences Chancellor Dr. Paul Roth; and Tracy Fitz, cut the ribbon to Reginald Heber Fitz Hall. The building, formerly known as the Basic Medical Sciences Building, was renamed in honor the School of Medicine's first dean on August 1, 2014.
Sara Mota

Roth has served 26 years as Dean of the School of Medicine and 14 years as Executive Vice President/Chancellor for Health Sciences.
By Alex Sanchez | November 06, 2019

In his office, Paul B. Roth, MD, MS, Chancellor of The University of New Mexico’s Health Sciences and Dean of the School of Medicine, has memories throughout the years displayed on shelves, spread across coffee tables and hung on walls. There are shovels from groundbreakings, a signed basketball thanking him for his partnership with UNM Athletics, and there is even a DIY-style cutout of his head on a stick that staff used to take around to meetings when he couldn’t attend.

It’s a lifetime of memories that will soon go in a box and be transferred to his home. Roth has decided that after 26 years as the dean of the School of Medicine and 14 years as the chancellor, it’s time for him to step down and assume a role that has always been his passion – mentoring medical school students.

The decision is an emotional one. Roth’s personal message to faculty, staff and students says, “Words can never describe what The University of New Mexico, the School of Medicine and the Health Sciences Center have meant to me over the years. I came here as a young man in 1976, fresh out of medical school, seeking a residency in family medicine. I thought this was just a next step in my career but what I found was a beautiful community, my family and my home.”

A reserved man, Roth’s tenure at UNM can be summed up by one word – leadership. His thoughtful approach to any topic, inclusiveness and commitment to collaboration has shaped the HSC into what it is today. The state’s only fully integrated academic health center is defined by a mission Roth has championed for decades, caring for all New Mexicans.

Under his leadership, Health Sciences grew from a small hospital, medical school and colleges of nursing and pharmacy to the mature, integrated health center that we know today.

The School of Medicine student body expanded by 30% and significantly diversified through the creation of the BA/MA Degree Program. The hospital grew from 423 beds to 527 beds with the opening of the Barbara and Bill Richardson Pavilion, which includes UNM Children’s Hospital. UNM Sandoval Regional Medical Center and the Health Sciences Rio Rancho Campus both opened under Roth’s leadership.

In addition, the HSC’s research mission grew to close to $200 million in annual grant funding, the College of Population Health was created and the partnerships and programs that serve rural New Mexico expanded exponentially.

This growth is even more meaningful because of the expanded circle of lives that have been touched by UNM Health Sciences. All told, under Roth’s leadership, this circle includes thousands of new patients receiving care and thousands of students educated. He’s inspired doctors and researchers to follow their passions and, in doing so, the HSC now oversees programs ranging in support and care for incarcerated youth to compassionate, family-centered treatment for pregnant women struggling with substance abuse – programs that every day make a difference in our communities.

Roth’s transformative leadership expanded beyond the borders of New Mexico. He is the longest-serving medical school dean at UNM, a respected member of the accrediting body for medical schools and a consistent voice for diversity, inclusion and service in medical education. He created and led medical disaster response teams, including a team responding to the 9/11 terror attacks and hurricanes in the Caribbean. One of his office mementos is a signed hard hat from 9/11 responders.

In her announcement to campus, UNM President Garnett S. Stokes called Roth a “trusted member of her leadership team” and went on to say, “Paul has been nothing but welcoming to and inclusive of me since I became President in 2018. He has kept me informed on the many ongoing projects and partnerships the HSC is currently undertaking. I fully support these important endeavors and will ensure continuity during the next few months and with any new leadership.”

In anticipation of this announcement, President Stokes requested James Holloway, UNM Provost and EVP of Academic Affairs, to chair the search, which will begin immediately. She has stated that the thoughts of the campus community will be important as the committee develops recommendations, and that multiple opportunities for input will exist throughout the process. The search process is expected to take several months.

To ensure continuity, President Stokes has asked Roth to remain on as chancellor until his replacement is in place, and Roth has agreed. While his service is winding down, Roth’s commitment to projects and collaborations vital to the HSC is not. Both Roth and Stokes have said the next HSC leader will continue these commitments as well.

Roth’s announcement comes on the heels of his recent push to make medical school free for those who commit to working in New Mexico four years post residency. HSC also just recently broke ground on the Nene and Jamie Koch Comprehensive Movement Disorders Center, which will treat New Mexicans in a facility designed specifically for their needs.

Then, of course, there is the new University of New Mexico Hospital tower – a long-standing dream for Roth – which is in the design phase and slated for a grand opening in 2024. The tower will boast state-of-the-art surgery suites, free up bed space in the current UNMH facilities and allow even more patients to access much-needed health care services.

Roth acknowledges the timing of his retirement is difficult, but with so many moving parts there would never have been a time for him to step down that didn’t involve leaving a project before its completion. He says he’s looking forward to watching these projects move forward from a different perspective in his new role with medical students. He also is hoping to spend more time with his wife and three children.

The final line of Roth’s personal statement to UNM makes it clear that this position, this campus, this commitment to service, wasn’t a just job: “This time with you has been the work of a lifetime and one of the greatest loves I have ever had.”

UNM Wins Five-Year $11.5 Million Grant for Center for Metals in Biology and Medicine