The sixth-floor lobby of the Bill and Barbara Richardson Pavilion at University of New Mexico Hospital became a makeshift radio studio Thursday as a trio of popular radio personalities launched a two-day community fundraiser for the Children’s Miracle Network.

Hosts Jackie, Tony and Donnie from 100.3 The Peak put on their headphones at 6 a.m. to launch their 12-hour radiothon, during which they interviewed doctors, patients and their families, traded quips with local TV personalities and made heartfelt appeals to their listeners to phone in pledges.

A bank of volunteers from local businesses and nonprofit organizations manned the phones in shifts for the annual event, the 10th hosted by the long-running 100.3 The Peak morning team.

“The listeners of The Peak have embraced this radiothon over the past 10 years,” said Donnie Chase, one-third of trio. “I credit them with the success of it.”

Hearing the stories of families whose children are struggling with serious illnesses is an incredibly moving experience, Chase said. “You just see these folks in their battles,” he said. “You know there’s nothing you can do, but you just want to give them emotional support.”

Money raised during the radiothon will be used to benefit the University of New Mexico Children’s Hospital, a longtime member of the Children’s Miracle Network, a 170-hospital fundraising consortium established in 1983, said Daniel Jaecks, an associate development director with the UNM Foundation who oversees the event.

The 10-year partnership with The Peak has brought in $2.7 million, money that has been used to pay for discretionary programs and equipment at UNM Children’s Hospital, including toys, child car seats, infant car swings and chemotherapy infusion machines, Jaecks said. The fund carried over about $65,000 this year,  he added.

While people can make one-time donations in any amount, the phone bank volunteers encourage callers to commit as Miracle Makers, who sign up to donate $15 or more on a monthly basis.

Cindy Weiner, from the national office of the Children’s Miracle Network, said the organization partners with 330 radio stations around the country and annually raises about $45 million through radiothons like the one at UNM. “Whatever dollars we raise stay in the market where it was raised,” Weiner said. 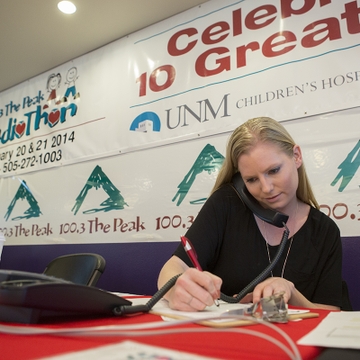 Amanda McKethan, an advertising traffic coordinator at Santa Ana Star Casino, was spending part of her day volunteering to answer the phones, the fourth year she has done so. She finds the experience rewarding in part because as the mother of a 10-year-old, she empathizes with the parents of children coping with serious illness.

Alex Cleland, who was busy folding souvenir nylon flying disks and stuffing them into small sacks, was a volunteer with a unique perspective: he was a longtime patient at the children’s hospital.

Now 27, Cleland was diagnosed with osteosarcoma – bone cancer – in his right leg shortly before he turned 14. It’s a disease that typically strikes teenagers going through a growth spurt.

Cleland’s surgeon, Dr. J. David Pitcher, a nationally recognized expert on the disease, cut out large sections of his patient’s femur and tibia and, in a first-of-its-kind operation, inserted an adjustable prosthesis that provided support for the leg.

Cleland spent the next month and a half in the hospital recovering. “I had a big old splint on my leg,” he said, pulling up his pants leg to show his scars. “I had a cast and 66 staples on one side of the leg. That was a very weird feeling.”

The surgery was followed by another nine months of chemotherapy, which also entailed frequent hospitalizations, Cleland said.  All told, he’s had 26 surgeries through the years.

A high point came when Cleland got to carry the torch for the 2002 Winter Olympics in Salt Lake City when it passed through Albuquerque. He proudly passed the torch off to Dr. Pitcher, who ran the next leg. “It was an awesome time,” he says. “I was very honored.” 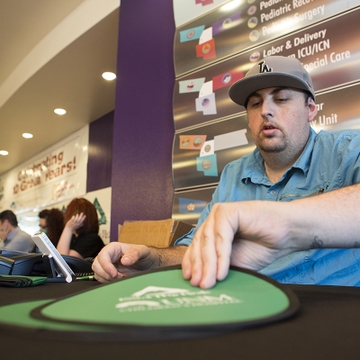 Alex Cleland, a former patient at UNM Children's Hospital, returns every year as a radiothon volunteer.

Now a graphic designer with a degree from UNM, Cleland returns to the hospital once a year for a checkup – and to catch up with old friends. “I try to help out as much as possible,” he says. “I try to give back.”

Stacy Taylor and her 18-year-old fedora-wearing son Avery dropped by to say hello. Avery made a more dramatic entrance the first time they came to the children’s hospital in 2001, his mother said. Then 6, he had suddenly stopped breathing after an undiagnosed case of T-cell leukemia caused his thymus gland to collapse a lung, entangle his heart and close off his trachea.

Avery received emergency radiation to shrink the enlarged thymus and a procedure to drain fluid from around his heart. Many months of aggressive chemotherapy, steroid treatment and radiation followed, Taylor said.

Today, Avery is home-schooled and doing well, although he has some cognitive difficulties and retrograde amnesia from having radiation treatments to his brain – what his mom calls “battle scars” from battling an aggressive disease.

“Leukemia is not easy – it’s tough,” she said. But she credits UNM doctors with giving her an incomparable gift. “They gave me his life,” she said. “We’ve had a wonderful life.”