The Art of Alleviating Suffering

UNMH palliative care team provides physical and psychological care and support for the critically ill and their families
By Michael Haederle | November 01, 2013

On a cool Monday morning in October, a half-dozen clinicians crowd into a small fifth-floor office tucked deep in the recesses of the University of New Mexico Hospital's internal medicine department to recite their weekly litany of woe.

A devoted mother wants to bring her brain-injured son home to care for him, convinced he is on a path of recovery.

An older patient with diabetes and serious lung disease might not leave the hospital alive.

Family members must decide on a course of care for a patient with a brain hemorrhage, respiratory failure and heart problems.

Despite the bleak prognoses, everyone in the room is surprisingly upbeat. Perhaps it’s because Dr. Lisa Marr, section chief for palliative care, and her team see cases like this every day – some 650 a year. 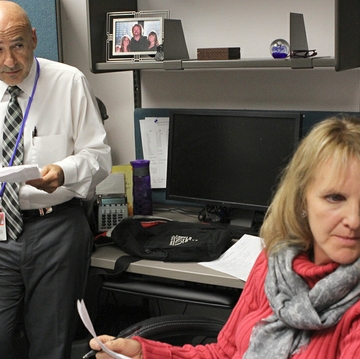 Where other health care providers are trained to pull out the stops to cure a patient, palliative care specialists are often called in when it becomes unclear if that will happen, Marr explains.

“The goal is to alleviate suffering – physical, psycho-social, spiritual,” she says. “There are some things that we just can’t fix, but you have to keep on trying.”

Marr, who established the hospital’s palliative care program in 2008, says she and her team are most often brought in for “goals-of-care” consults, which usually involve a patient’s family or guardian.

What are a patient’s realistic prospects of recovery? Should active medical interventions be withdrawn? What facilities exist to take a patient after discharge from the hospital? Those sorts of decisions are seldom cut-and-dried.

“It’s an art,” Marr says. “I have to be really good medically, but also pull back and ask what’s happening with the family.”

Palliative care medicine is “multi-disciplinary,” pulling together care providers from a variety of backgrounds to craft a patient’s treatment plan. Marr’s team includes physicians, nurse practitioners and a social worker.

“I’m fortunate that I’ve got this incredibly skilled group,” she says. “To do this kind of work, you have to like being in a team. You’re not a lone wolf.”

The team members are also able to provide one another with the psychological support they need to engage on a daily basis with patients who often have little reason to hope for recovery.

Marr, who grew up in Baltimore, gravitated toward medicine because “I wanted to do good,” she says.

Her father suffered a brain injury just as she started her medical training, but lived for another 17 years with mental impairment. “He was like somebody with moderate dementia,” she says. “I think that profoundly affected my medical career.”

In 1998 she met a palliative care physician during a workshop on death and dying at the Upaya Zen Center in Santa Fe. For Marr, who already had a personal meditation practice, it was a watershed moment that changed her both personally and professionally.

In 2002 she held a Harvard University palliative care fellowship at Massachusetts General Hospital. The next year she took a job as a palliative care physician at the Medical College of Milwaukee.

While there, she also became a student of Tonen O’Connor, a Soto Zen Buddhist priest. Marr herself was ordained as a priest in 2006 and in 2012 she received dharma transmission, authorizing her to teach.

Marr sees the Buddhist practice of staying present with one’s experience, moment by moment, as both complementing and sustaining her palliative care work.

It entails entering into each encounter with a patient with an open, non-judging mind, she says. It also means fully acknowledging one’s own emotional reactions in the face of suffering.

“We’re a suffering-denying society,” she says, adding that she and her team members don’t have the luxury of averting their eyes from the suffering they encounter in the hospital on a daily basis.

“We run toward it, as opposed to running away from it,” she says. “That’s where I think Zen practice has helped me.”

Clinical nursing specialist Kim Harlow describes an alcoholic patient with liver carcinoma who oncologists have already decided is not a candidate for chemotherapy or a liver transplant.

The patient will die of the disease in the long run, Harlow says. “The question is where is that going to happen, and with whom?”

Those drawn to palliative care are self-selected, Marr observes. “A lot of people have had some sort of loss in their life,” she says. Their sensitivity is crucial in this work, she says, because “we’re the instrument of care in palliative care.”

But it’s equally important that the team members take care of themselves and lead balanced lives. “I’m focused on sustainability,” Marr says. “I don’t think you can be a good palliative care doctor unless you have a life outside of this.”

In her case, the work is its own reward, although she also has teaching duties as a full professor in the School of Medicine and somehow finds time to contribute to the Journal of Palliative Care.

“I always like talking to people,” she says. “As a primary care doctor, I was just rushing from patient to patient every 15 minutes, putting out fires.”

Now she can afford to take more time with her patients. And after 11 years in the field, they still engage her. “This,” she says, “is a more integrated way to do medical practice,”