A new poll released last week shows that nearly 40 percent of U.S. adults are worried there will be a large Ebola outbreak in this country. But such fears aren’t justified, Ebola experts say.

A large, lengthy Ebola outbreak like the one happening in West Africa would be unlikely in the United States, according to Dr. Steven Bradfute, a University of New Mexico scientist who has studied the virus for years.

Bradfute, a research assistant professor at the UNM School of Medicine, says that the disease isn’t nearly as transmissible as some other viruses, like influenza. Ebola is spread only through close contact with bodily fluids, rather than through the air. According to the U.S. Centers for Disease Control and Prevention, hospitals in 27 states have investigated 68 possible Ebola cases – with samples from at least 10 of those cases going to the CDC for testing. All have been negative and there has never been a confirmed case of Ebola transmission in the U.S.

Still, the poll, conducted by the Harvard School of Public Health and market research firm SSRS, also shows that more than a quarter of adults are concerned that they or someone in their immediate family might become sick with the Ebola virus over the next year. 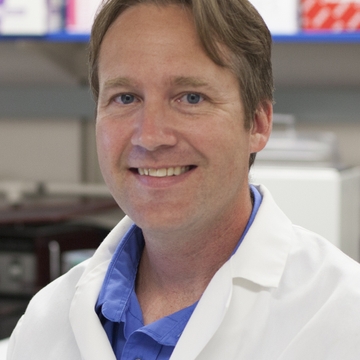 “Ebola is not known to be transmitted by coughing, only by close contact,” Bradfute said in a recent interview in his UNM lab. “We should be vigilant about Ebola cases coming into the U.S., because it is a very dangerous virus. But if you isolate patients with infection, you can really contain it.”

In the U.S., modern health care facilities and public health measures make that containment relatively easy. But in other areas of the world that lack the same infrastructure and access to health care, it’s a much more difficult task. The ongoing outbreak in West Africa, which has killed more than 1,350 people, sheds a light on the need for an Ebola vaccine, something Bradfute has been working on for years.

“A lot of people have been worried about this, and it confirms their fears,” said Bradfute, who works in UNM’s Center for Global Health, part of the School of Medicine’s Department of Internal Medicine. “While the numbers of cases aren’t nearly as high as other viruses, the current outbreak does go to show that Ebola virus is very dangerous and you have to take it seriously.”

Bradfute has been trying to better understand how the Ebola virus is so good at blocking the body’s defenses. When the body’s early immune response is blocked, the virus can replicate more easily, leading to inflammation, internal bleeding and organ damage.

“That’s what makes the virus so dangerous,” Bradfute said. “When the body’s early response is blocked, you get more virus, and then your body over-responds.”

Before joining the faculty at UNM, the Portales, N.M., native worked at the U.S. Army Medical Research Institute of Infectious Diseases (USAMRIID) in Fort Detrick, Md., home to one of only a handful of labs in the country that can safely handle the virus.

It’s a career path that for Bradfute began on Sept. 11, 2001, when terrorists attacked the United States. Bradfute, a graduate student at the time, decided “to do something that had a chance to be impactful to people.”

“And I really liked the idea of working on something that was largely unknown as far as the immune response,” he said. “It’s really fascinating work.”

At UNM, Bradfute continues to collaborate with scientists at USAMRIID, though he now conducts his research using safe, non-infectious pieces of the virus. He hopes to improve the effectiveness of several experimental vaccines that have been developed over the past 15 years. While these vaccines have not been tested extensively in humans yet, they have shown promising results in animal models.

“There are good candidates out there,” Bradfute said. “We’re trying to tweak them to make them more effective.”

To do that, Bradfute is focusing on glycoprotein, a molecule found on the five different types of Ebola, including the current Zaire Ebola strain currently spreading through West Africa. All of the potential vaccines work by triggering an immune response against this protein. Bradfute is trying to modify the glycoprotein so that it generates a more effective immune response.

Meanwhile, the findings of this week’s survey revealing widespread concern of a large U.S. outbreak suggest that the public needs to be better educated about the virus.

“As they report on events related to Ebola, the media and public health officials need to better inform Americans of Ebola and how it is spread,” said Gillian SteelFisher, deputy director of the Harvard Opinion Research Program and research scientist in the Harvard's Department of Health Policy Management.

UNM Wins Five-Year $11.5 Million Grant for Center for Metals in Biology and Medicine

Finishing School in a Pandemic